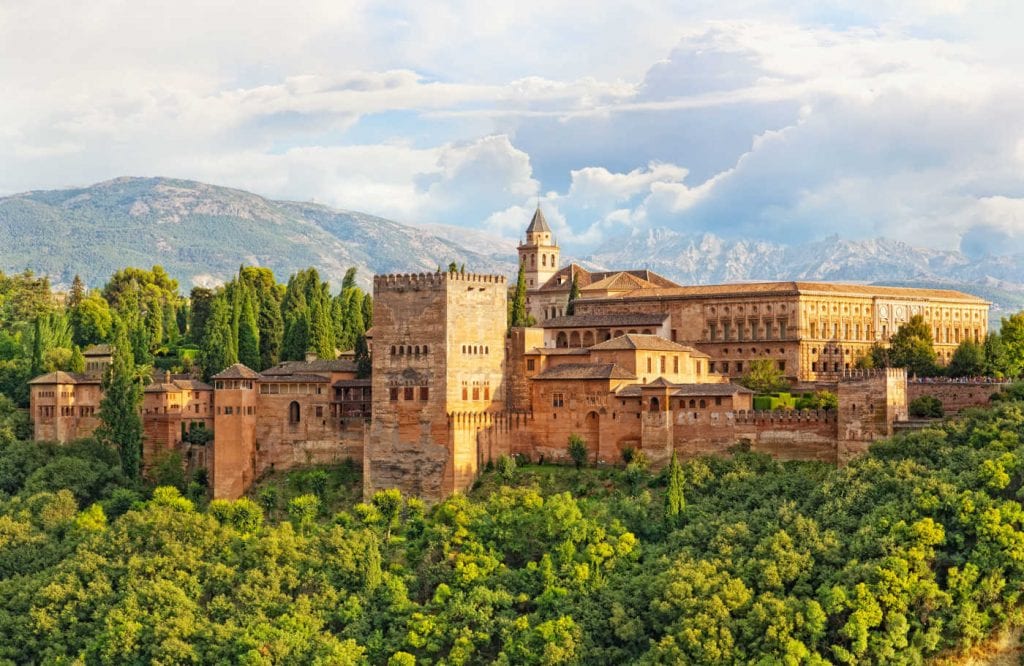 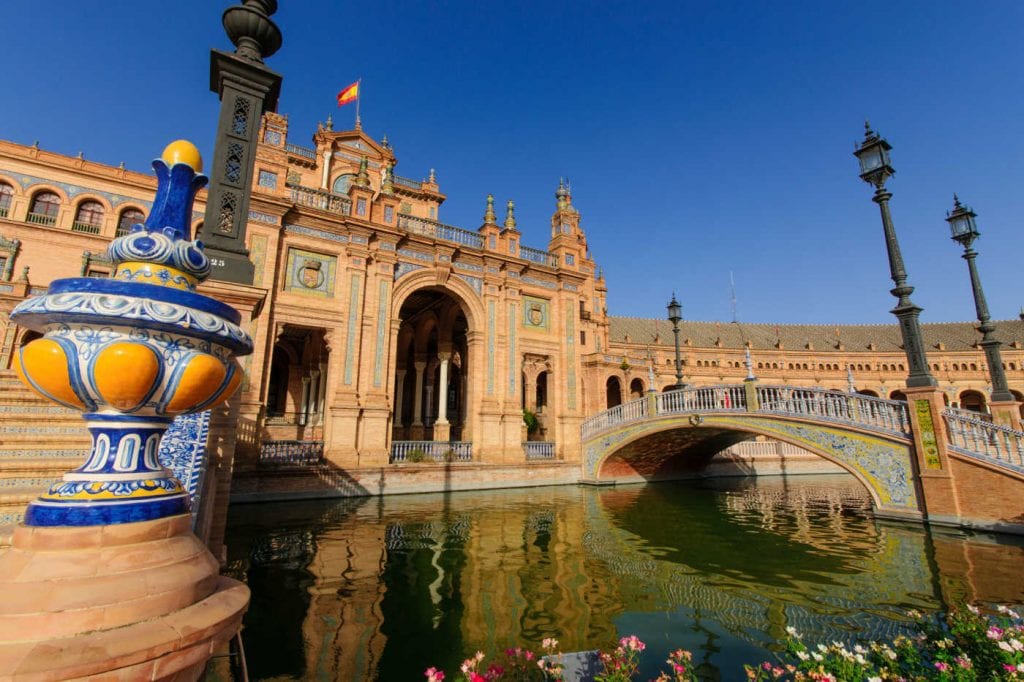 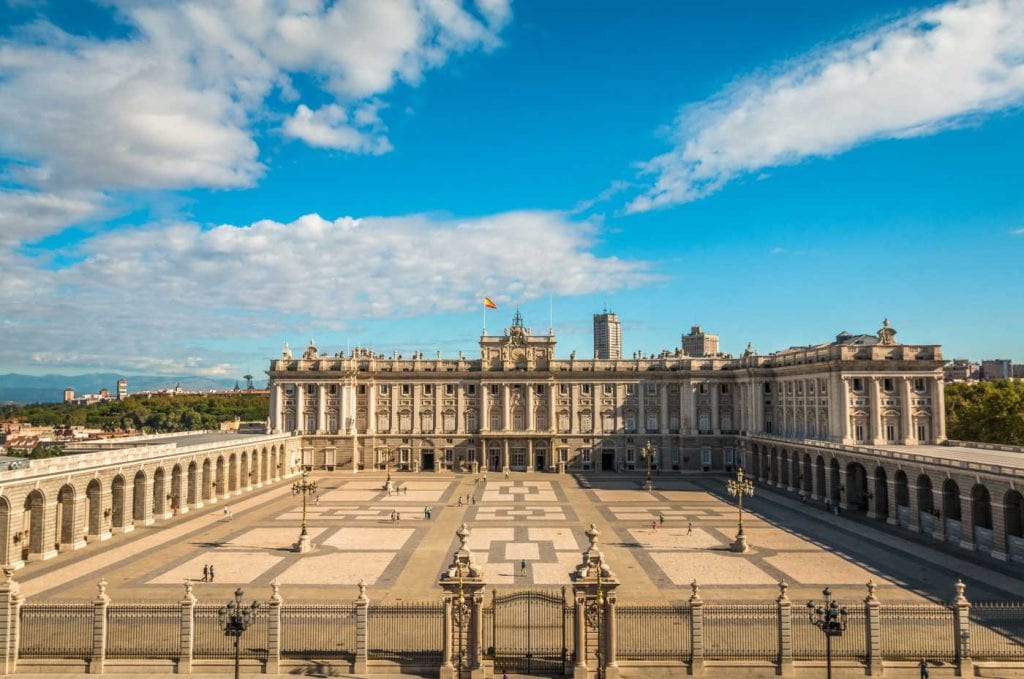 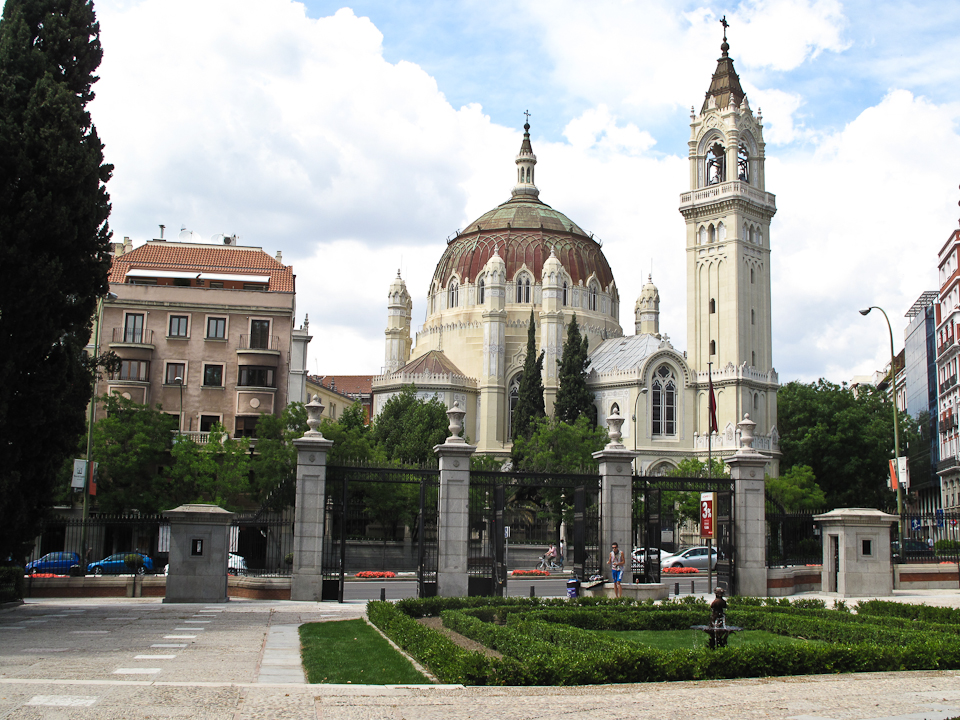 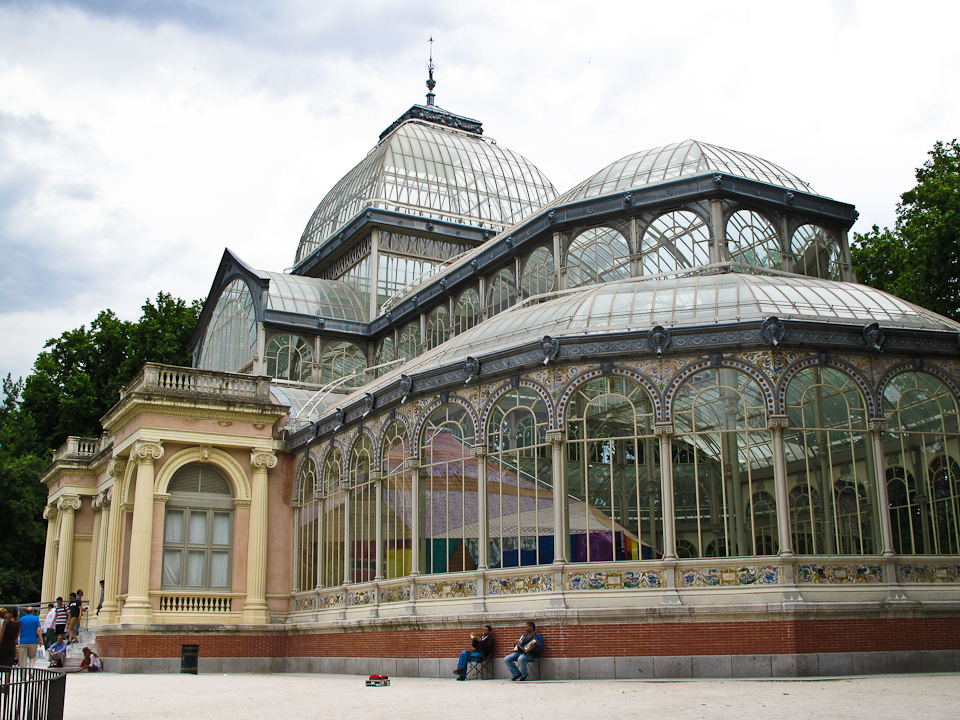 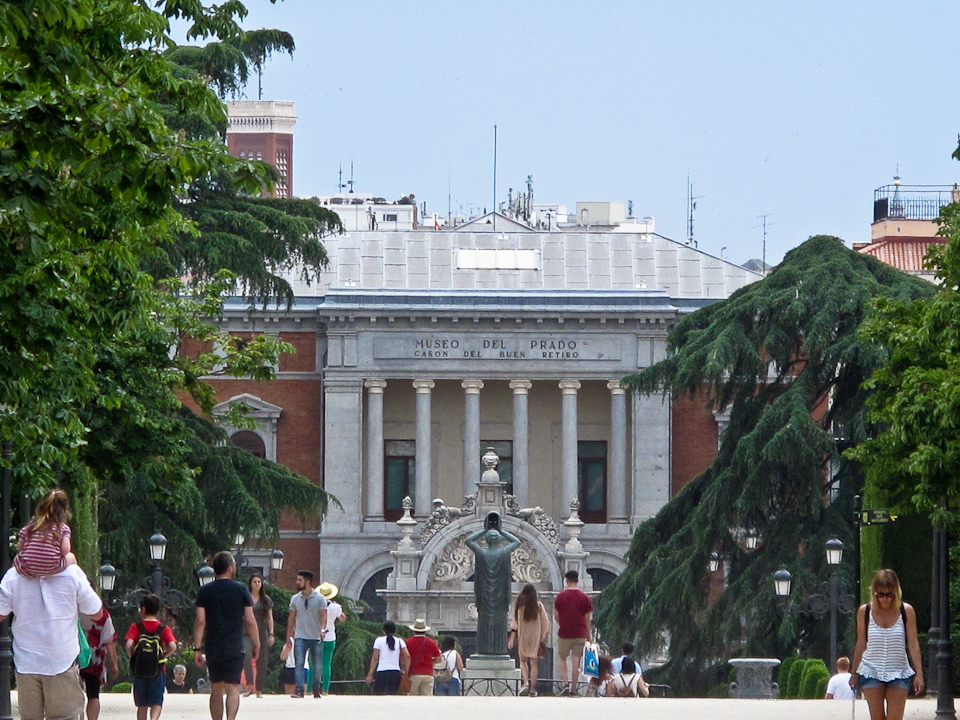 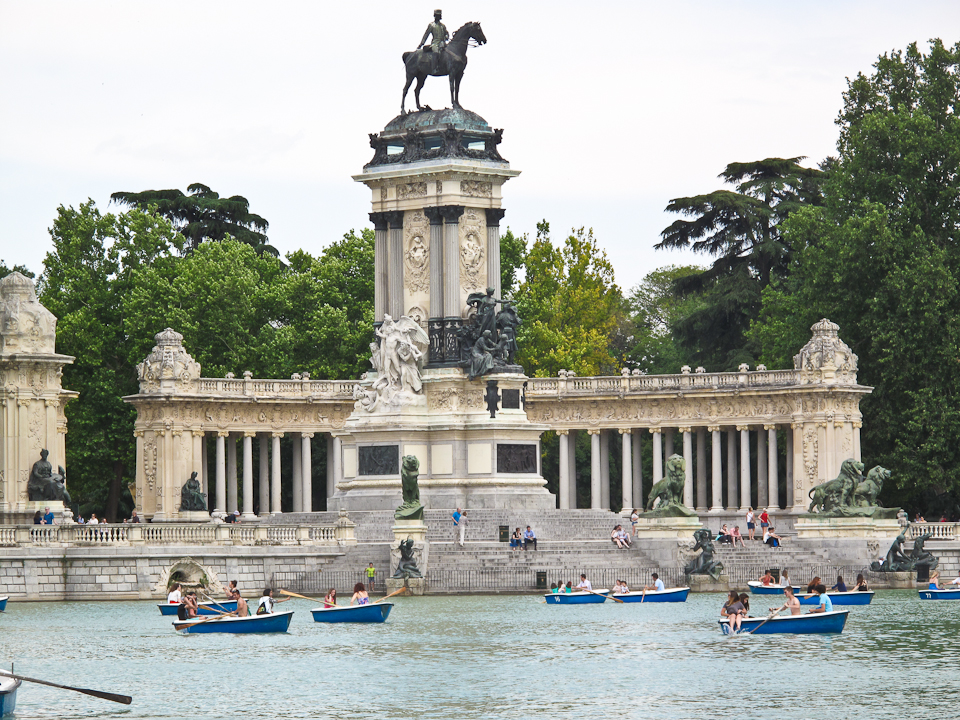 Amazing Andalusia
Begin your España escape in Madrid, then make your way down to Andalusia! Enjoy stays in Seville, Granada and Cordoba as you experience this sun-kissed Spanish region.

Travel by train through Andalusia, discovering the beauty and culture of three of its most significant cities – Cordoba, Seville and Granada. Each are home to sites which have been awarded the UNESCO World Heritage designation; In Granada, you’ll see the Alhambra Palace, the Generalife Gardens and the medieval Albaicín neighborhood; in Cordoba, its historic center with the great Mosque; and in Seville, the Cathedral, the Alcázar Palace and the Indies Archive.

As you make your way through these gems of Spain, indulge in tapas, sample sangria, hear Spanish guitar played on the streets, and enjoy the leisurely lifestyle while being surrounded by some of the country’s most breathtaking buildings and landscapes.

Welcome to Madrid, the Capital of Spain! On arrival, you’ll be met by your English-speaking driver and transferred by luxury car to your hotel for the next 3 nights.

The remainder of the day is yours at leisure, to begin exploring the city. Consider starting it on a sweet note by treating yourself to a plate of the city’s most famous dessert: chocolate con churros!

In the morning, following your buffet breakfast, you’ll embark on a comprehensive city tour that will showcase all of the most popular and interesting sites in Madrid!

The remainder of the day is yours at leisure, to continue to experience Madrid on your own. Take advantage of Madrid’s abundance of museums filled with iconic works and breathtaking masterpieces! You can experience surrealism and post-impressionism, including Picasso’s Guernica, at the Reina Sofia, or become enveloped in European art at the famous Prado museum.

After your panoramic visit of the city of Madrid, you’ll be taken on a guided tour of the majestic Royal Palace, a beautiful exponent of the 18th century, and one of the best preserved palaces in all of Europe.

After breakfast, make your way to the rail station to catch the high-speed train to Cordoba – a UNESCO World Heritage Site and thousand-year-old city that harmoniously blends history with modernity.

In Cordoba you should stroll through the historic quarter to discover the great Mosque-Cathedral, a symbol of the city which reflects both its importance during medieval times, as well as the Arab presence in the Iberian Peninsula.

From there, visit the Synagogue – the only one that still stands in the city, and a symbol of the three cultures – Christians, Arabs and Jews – that lived together for centuries.

CORDOBA, SPAIN 4 out of 5 stars

Located in central Cordoba, Hotel Macia Alfaros is just a few minutes walk to the Roman temple and just a ten minute walk from the world famous Mosque and Jewish Quarter. Upon entering the hotel, you’ll be overcome with traditional Andalusian details like colorful tiles, columns and arches. Each of the stylish and modern rooms feature free WiFi, flat-screen TVs, minibars and more. You can enjoy the typical gastronomy of Cordoba in our very own Alarifes Restaurant, as well as a daily breakfast buffet. With a warm and mild climate all year round, you’ll have ample opportunity to take a dip in the outdoor pool.

After breakfast, make your way to the rail station, to pick up the high-speed train to Seville. Situated on the banks of the Guadalquivir River, Seville enjoys a rich Moorish heritage, with many streets, squares and and historic quarters boasting UNESCO World Heritage designation.

Check in to your hotel, and enjoy the remainder of the day and evening at leisure.

In addition to an outdoor pool, Melia Lebreros provides a 24-hour fitness center and a seasonal outdoor pool. The hotel offers a coffee shop/cafe. Guests can unwind with a drink at one of the hotel’s bars, which include a poolside bar and a bar/lounge. Public areas are equipped with complimentary high-speed wireless Internet access.

Enjoy a guided tour of the most emblematic monuments of Seville: the University, the Old Tobacco Factory, and the setting of Bizet’s opera Carmen. You will then see the Plaza de España, the centerpiece of the 1929 Iberoamerican Exposition, followed by the famous building known as the Queen’s Sewing Box, “El Costurero de la Reina,” San Telmo Palace and the Triana neighborhood.

Then discover Santa Cruz, the famous Jewish quarter: a labyrinth of narrow streets, which lead to the gorgeous Plaza de los Venerables.

Finally your tour concludes with a lovely river cruise, offering a completely different vantage point from which to observe this beautiful city. On board we can see first-hand the untouched sides of the Golden Tower, the famous Calle Betis, the Bullring and Triana Bridge – the oldest in the city, designed by none other than Gustav Eiffel.

Make your way to the rail station, to catch the train to Granada. Granada is one of the most interesting cities in Eastern Andalusia with its impressive Al-Andalus heritage, and unmistakable Moorish essence; it was the last city to be reconquered by the Catholic Monarchs in 1492.

Its old town neighborhood, the Albaicín, has been awarded UNESCO World Heritage designation, together with the Alhambra and Generalife, of which you will enjoy a tour today.

Train from Seville to Granada.

Check in – Hotel Abades Recogidas
The place to stay in Granada, Spain

The 5-star Hotel Abades Recogidas is set on a bustling street and decorated with art showcasing Granada’s history, this modern hotel is an eight-minute walk from the Granada Cathedral and one-mile from the Alhambra medieval complex.

The Alhambra is without a doubt the most famous attraction in Granada, and on your included walking tour, you will explore this incredible UNESCO World Heritage Site, along with the stunning Generalife Gardens, with the assistance of a professional local guide.

You’ll learn about the fascinating Moorish history of this former palace, fortress and home to Moorish kings and sultans, as well as the impact of Arabian culture on the city’s glorious history. In addition, you’ll explore the buildings that make up the rest of the palace complex, including the Alcazaba Fortress, Nazari Royal Palaces and Palace of Carlos V.

Your tour of Madrid and Andalusia comes to an end today. Following breakfast, you will be transferred back to the airport, for your return flight home.

Spain 8 Days
$1,780.00
Best of Catalonia Barcelona and beyond Travel to Barcelona, Costa Brava and the countryside on this Catalonian adventure! Soak in the history and culture of...
View Details
Available through out the year:

Spain 6 Days
$1,563.00
Discover Barcelona Fun in the sun in Catalonia's capital Known for its art and architecture, Barcelona is a dazzling Spanish city that lures you under...
View Details
Available through out the year: