Home >Our Destinations >Greece >Jewels of the Cyclades Cruise: Athens to Athens

Jewels of the Cyclades Cruise: Athens to Athens

This 8-day cruise takes you through the heart of the Cyclades Islands in the Aegean Sea. 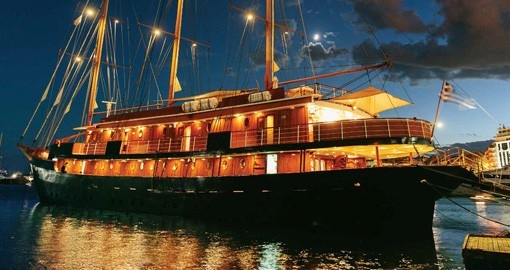 Embark in Athens, Greece’s capital and the centre of their ancient civilization. Athens is a landmark city, filled with ruins from fifth century B.C. such as the famous Acropolis. From Athens, you’ll cruise into the Aegean Sea and enjoy the stunning beaches and picturesque villages of the Cyclades Islands. 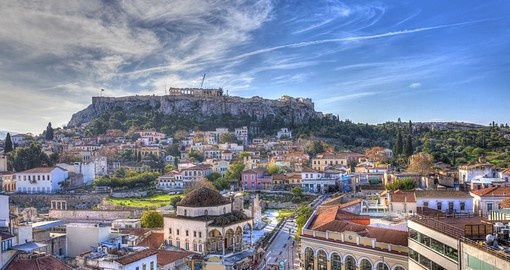 Stop by Poros, separated from the Peloponnese by a mere 200-metre waterway. From Poros, cruise to the uninhabited island of Poliegos, which gets its name from the “many goats” that roam its land. The beaches on the southern side of the island are among the best in the Cyclades and the sea-surface caves house the region’s monk seals. Nearby Folegandro is one of the hidden treasures of the Cyclades. CNN dubbed it as having one of the seven loveliest villages in all of Europe. See for yourself if they were right. 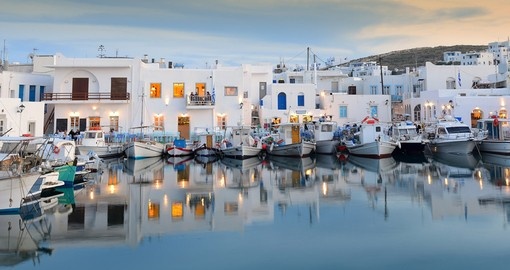 Home to the whitewashed houses you imagine when you think of Greece, Santorini is better than the postcards promise. Perched on 300-metre cliffs over the ocean, the towns are spectacular. Santorini got its unique crescent shape and rugged landscape from a volcanic eruption in the sixteenth century B.C. It’s also home to the Minoan ruins of Akrotiri, one of Greece’s foremost archaeological sites. Antiparos and Paros are located at the centre of the Cyclades. Swim in the waters of Antiparos Bay and stroll the beachside streets of Naousa. Paros is famous for its historical marble quarry, which supplied the marble used to carve the Venus de Milo.

Delos is the sacred heart of these islands. According to Greek mythology, it’s the birthplace of the twin gods, Apollo and Artemis. It’s also one of Europe’s most significant ruins. If Delos is the sacred heart of old Greece, Mykonos is the thumping heartbeat of new Greece. The island is second-to-none when it comes to nightlife. It’s filled with beachside DJ parties, electric clubs and high end restaurants that’ll leave you buzzing. 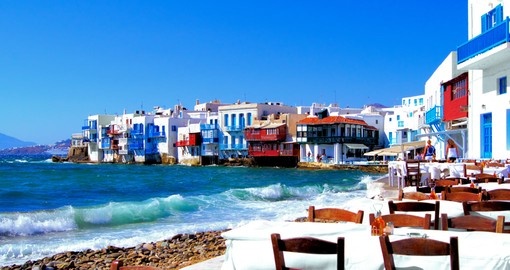 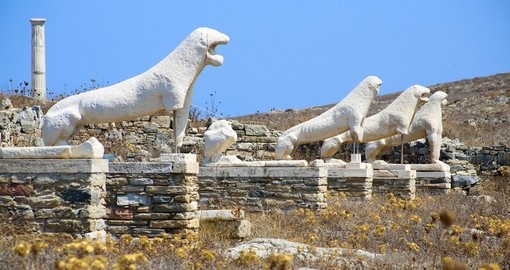 Before returning to Athens, get a taste for the ordinary routines of the Cyclades in Syros, the islands’ capital. You’ll also pass by the ruins of the Greek Temple of Poseidon at Cape Sounion right outside Athens. This cruise through the islands of the Cyclades will leave you revitalized by Greece’s warm waters and bright sun. 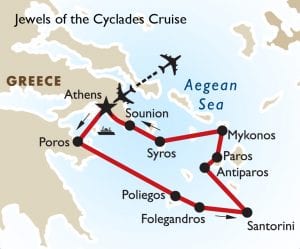 OTHER INFORMATION:
Itineraries can be changed at the discretion of Variety Cruises and of the Vessel’s Captain in case of adverse weather conditions (winds of 6/7 beaufort or more depending on the vessel) on port authorities not allowing a vessel to leave port or in case of other extraordinary conditions. Such itinerary changes do not entitle automatically passengers to any refunds but Variety Cruises guarantees that passengers are disembarked at the advertised port of disembarkation on time for their flights.

You must ensure that you have appropriate travel insurance for the entire duration of your holiday to cover you for cancellation, illness, death or personal injury, medical treatment, damage to and/or loss of luggage, repatriation etc. Rates and schedules not guaranteed until booked.

Embarkation at Marina Zea in Athens, between 2-3 pm. Enjoy a welcome drink and meet your crew and fellow passengers. Sail for Poros for a short 3 hours visit, before set sail to Poliegos.

The M/S Galileo, built with the most stringent safety regulations, was launched in 1992 and was fully rebuilt in 2007. The latest renovation works of the M/S Galileo took place between November 2015- March 2016 and included significant upgrading of the guest accommodations as well as the indoor & outdoor public areas.

The elegant Galileo has operated cruises in the Mediterranean Sea and the Indian Ocean. The Galileo is always sailing under motors. Sails are occasionally used when weather and route allow.

Service on board is provided by your Captain, the Cruise Coordinator and your experienced Marine and Hotel crew members.

Morning arrival in Poliegos, a very small island known for its amazing beaches. Morning swim stop followed by a BBQ on deck. Afternoon sailing to Folegandros, one of the most amazing and less known islands in the Aegean Sea. Walk the amazing Upper city and dine at one of the traditional Greek tavernas.

Overnight onboard in Folegandros.

Early in the morning depart for Santorini. Morning arrival at Santorini (occasionally at anchor) to explore its unique capital Fira. Optional Excursion to Akrotiti excavations and a tour of the villages including the small beautiful village of Oia known for its breathtaking view over the caldera.

Overnight onboard in Santorini.

In the morning you will enjoy a swim stop in an enchanting bay of Antiparos. Early noon arrival in Paros. Visit Parikia and the quaint village of Naoussa. Time to have a fun night and show us your dancing skills during our famous Greek Night.

Overnight onboard in Paros.

Optional morning tour to the unique archaeological site of Delos, antiquity’s most sacred island. Later on, we stop at one of Mykonos beautiful bays for swimming off the ship before sailing into the port of Mykonos. The island of the jet setters is yours to explore and the night is young.

Overnight onboard in Mykonos.

After a morning swim we will arrive in Syros, the capital of the Cycladic islands where you can enjoy one of its beautiful sandy beaches or walk through town and enjoy the unique architecture of the buildings.

Overnight onboard in Syros.

Captain’s Farewell Dinner and overnight onboard in Marina Zea.

Disembarkation at 8-9 am after breakfast. 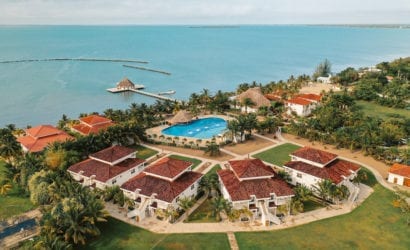 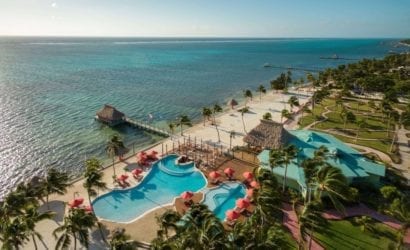 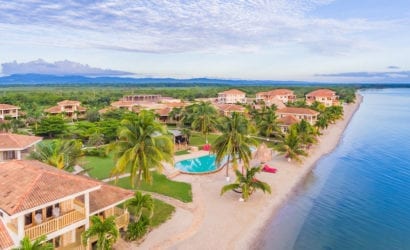 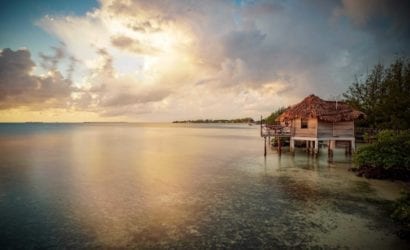 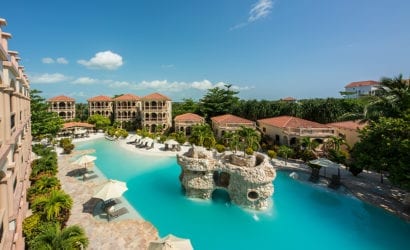