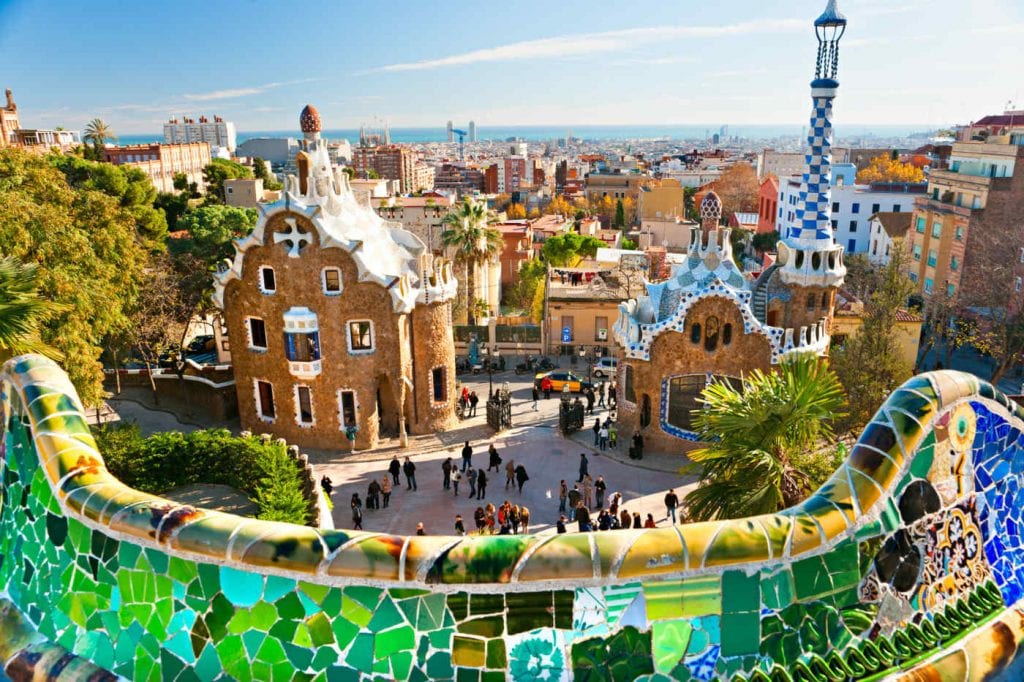 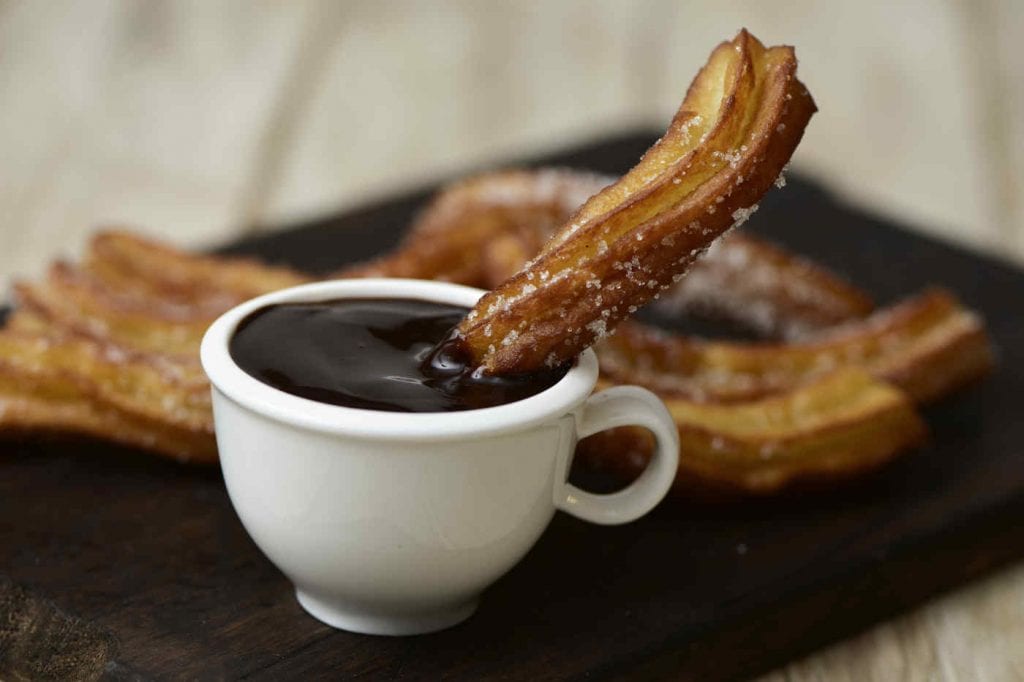 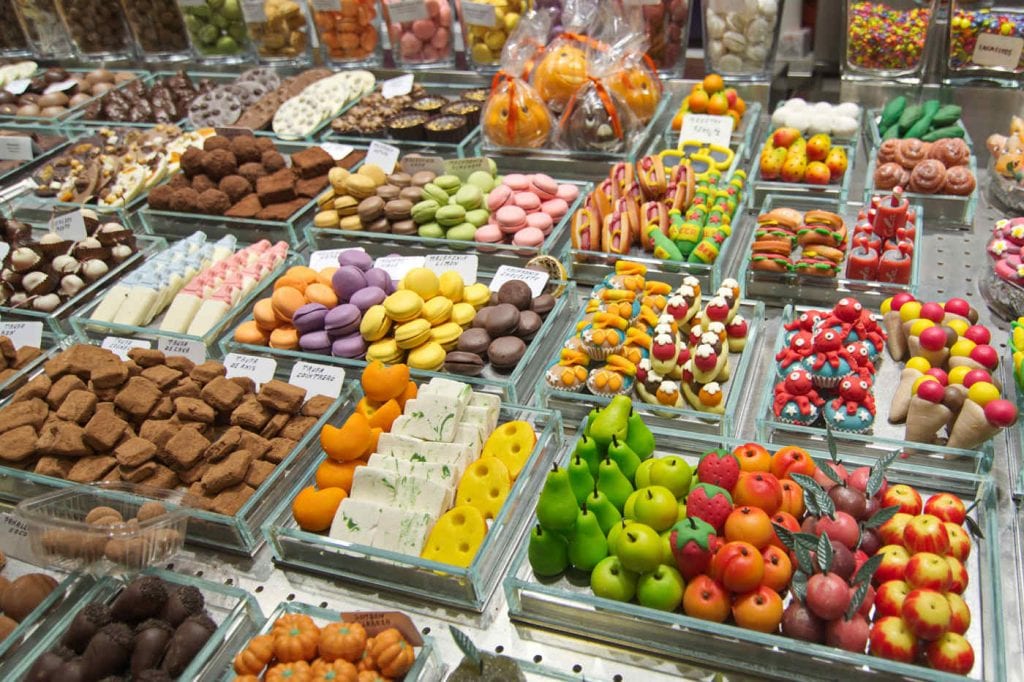 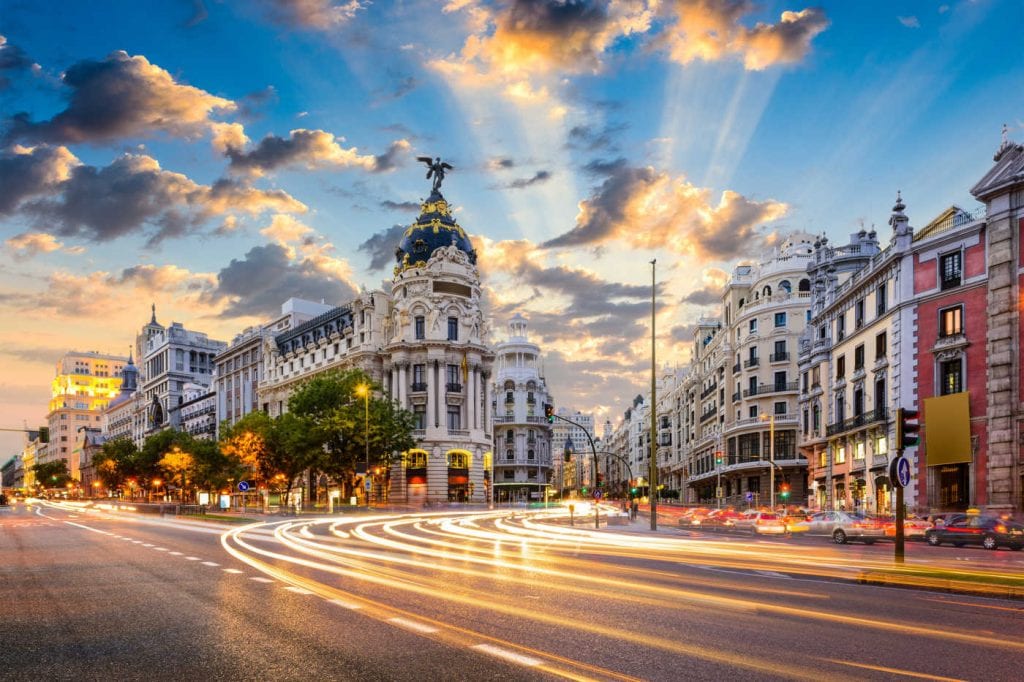 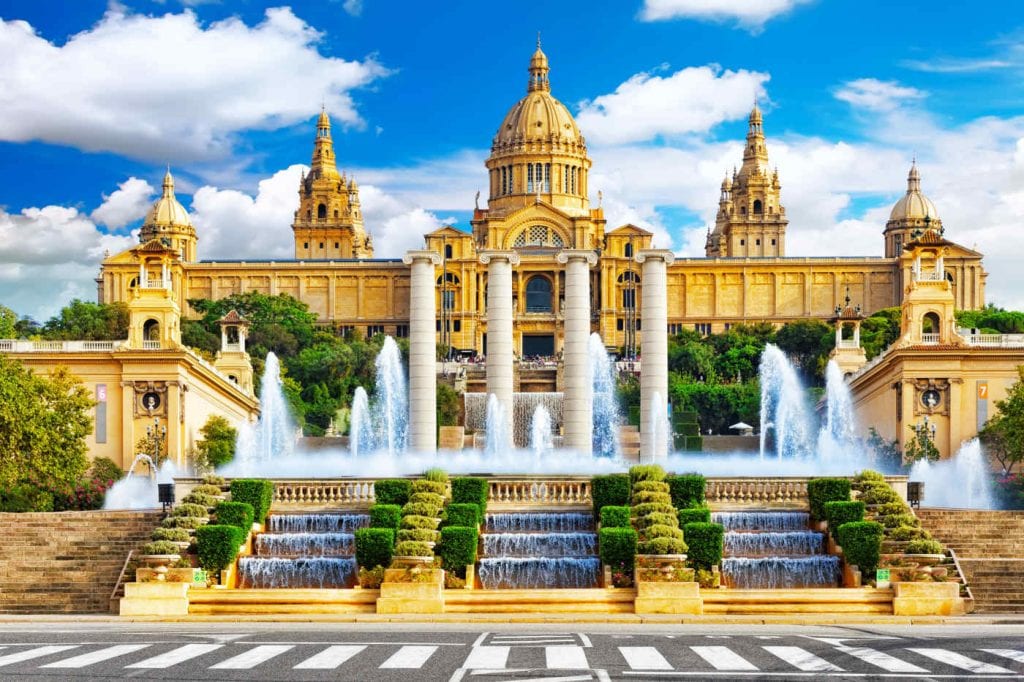 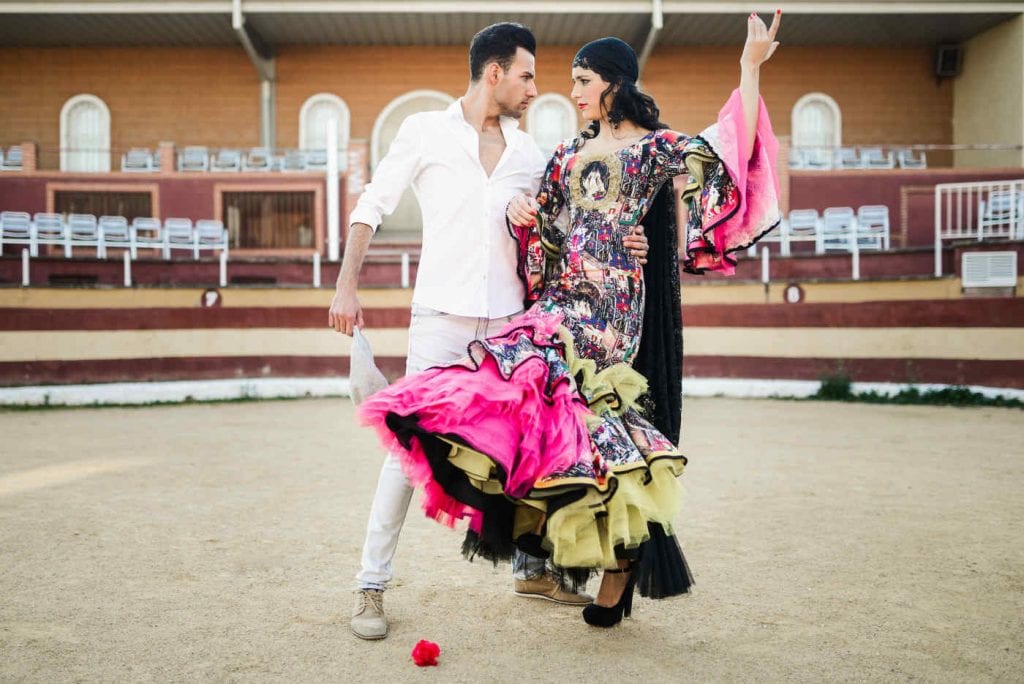 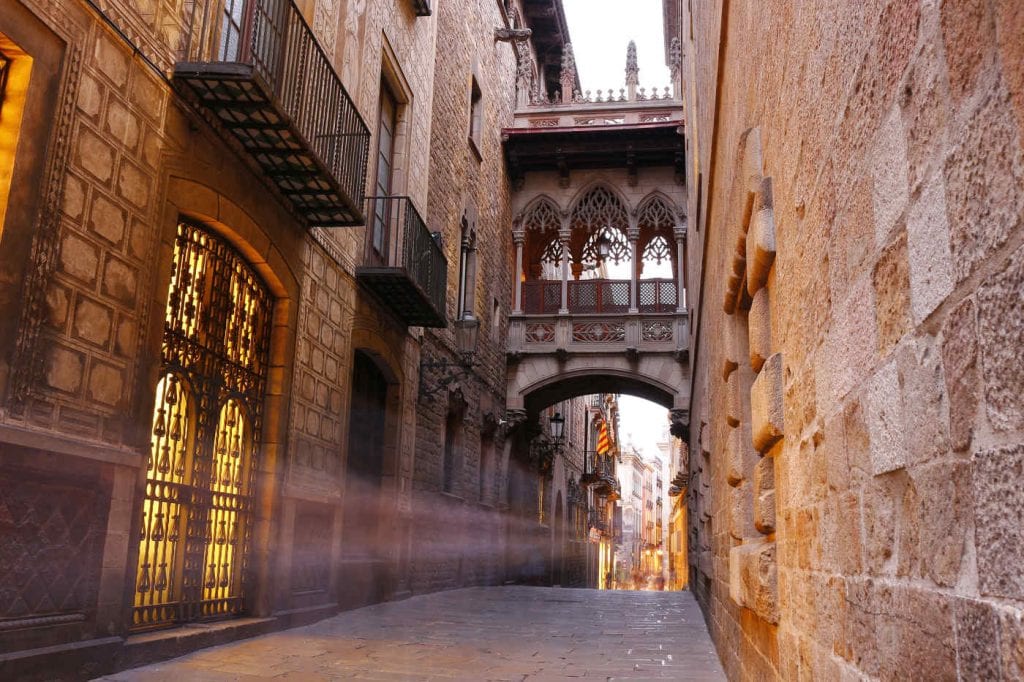 Culture and cuisine in Spain’s biggest cities
Explore two of Spain’s famous cities on this 6 or 8-night vacation! Kick off your Spanish adventure in elegant Madrid, then ride the rail to coastal Barcelona. Enjoy sightseeing tours in each city and breakfast daily.

Relax on the high-speed train from from Madrid to Barcelona, then enjoy your remaining nights in a city where art seamlessly blends with life. Barcelona is home to eclectic architecture and beautiful art by Antoni Gaudi and some of the world’s most beloved landmarks including the Sagrada Familia. From bustling markets to Gothic alleyways, you can see it all.

Welcome to the vibrant capital city of Madrid! On arrival, you’ll be met by your English-speaking driver and transferred by luxury car to your hotel for the next four nights.

The remainder of the day is yours at leisure. Consider spending your first night at a tapas bar sampling the local specialties!

MADRID, SPAIN 4 out of 5 stars

In the morning, following your buffet breakfast, you’ll embark on a comprehensive city tour that will showcase all of the most popular and interesting sites in Madrid!

After your panoramic visit of the city of Madrid, you’ll be taken on a guided tour of the majestic Royal Palace, a beautiful exponent of the 18th century, and one of the best preserved palaces in all of Europe.

Today you have an entire day to explore this vibrant city! Madrid is a city overflowing with museums, so take advantage of the cultural splendors here.

The Museo del Prado is home to some incredible art work by legends such as El Greco, Goya and Velazquez.Or for those with a taste for surrealism, the Reina Sofia Art Center is home to over 300 modern works by Dali, Miro, and Picasso among others. A visit to the Museo Centro de Arte to see the Picasso anti-war mural, Guernica, is an absolute must.

In the evening, consider treating yourself to a Flamenco show!

The city of Madrid is home to many parks, including the breathtaking Casa de Campo, which is about five times bigger than New York’s Central Park! If the weather permits, you may want to spend a day enjoying the scenery.

In the second part of the day, head to the bustling Puerta Del Sol, for some serious shopping and snacking! Consider ending your Madrid stay on a sweet note by treating yourself to a plate of churros con chocolate – the city’s most famous dessert!

After breakfast, make your way to the train station in Madrid, to pick up the high-speed train to Barcelona. A mere 4 hours later, you will be in the Catalonian capital!

Check in to your hotel, and enjoy the remainder of the day and evening at leisure. For dinner, choose a restaurant specializing in paella – Barcelona’s signature dish!

BARCELONA, SPAIN 4 out of 5 stars

Hotel Barcelona Confal Mar by Melia is a four-star hotel near the Barcelona International Convention Centre. Located in close proximity to the beach and Diagonal Mar shopping mall, the hotel makes a leisurely afternoon easy to fill. Take a dip in the outdoor swimming pool which provides stunning views of Barcelona, or maintain your wellness routine in the fully equipped gym, Turkish bath, and massage booths. Each guest room is recently renovated, spacious, and elegant. Wake up early to enjoy the breakfast buffet before you hop on the nearby public transit to start your day!

Following breakfast, see the very best of Barcelona on a half-day guided tour!

In the evening, head to the famous La Boqueria Market on La Rambla for a bite. In this vibrant market you’ll find local foods, freshly caught fish, and sweets in the most whimsical of shapes.

See the very best of Barcelona on this half-day guided tour that takes you to such landmark sites as Via Layetana, the Cathedral, the Gothic Quarter and Plaza Sant Jaume, as well through the Port and Olympic Village, and Barcelona’s most famous beach – La Barceloneta.

From there you’ll visit Montjuic for its amazing and commanding views of the city and the port from the highest mirador (or gazebo) in the city. You will tour the Olympic Stadium and Sant Jordi Palace, and will experience Barcelona’s Spanish Village, with 117 buildings typical of all regions of Spain, including restaurants, shops and craft workshops.

During your time in Barcelona you will be surrounded by the work of the famous Gaudí. Take a stroll through Park Güell, where buildings covered in brightly colored tiles await.

You’ll also want to leave a few hours to take in the beauty of the Sagrada Familia, a Christian temple and the most famous and spectacular of Gaudí´s works. He died before finishing the cathedral but his successor continues the project to this day.

Today, take a stroll to the Barri Gotic (Gothic Quarter) where the 13th century Gothic Cathedral is located. You can visit the Palau Nacional, home of the Museu Nacional d’Art Catalan where you will find an impressive collection of medieval art. Or, if you still haven’t had your Gaudí fix, you’ll want to check out Casa Mila, his last civil work, or the amazing Casa Batllo.

In the evening, head to the city’s magic fountain of Montjuïc for a spectacular water show, filled with music and colors!

Depart Spain from the Barcelona Airport.

Spain 14 Days
$5,990.00
Spain and Portugal Lisbon Portugal - Madrid Spain There’s a lot of history to be rediscovered in Lisbon at places such as Mosteiro dos Jerónimos,...
View Details
Available through out the year:

Spain 14 Days
$5,790.00
Paradors of Northern Spain Nature lovers revel in the majesty of the spectacular Pyrenees and Picos de Europa. History buffs marvel at San Sebastián, and...
View Details
Available through out the year:

Treasures of Spain and Portugal

Portugal, Spain 13 Days
$7,990.00
Treasures of Spain and Portugal Set sail for a 13-day Spain and Portugal cruise adventure aboard your Windstar yacht, view monuments to heroes past in...
View Details
Available through out the year: