Home >Our Destinations >Egypt >Gem of the Nile with Cruise 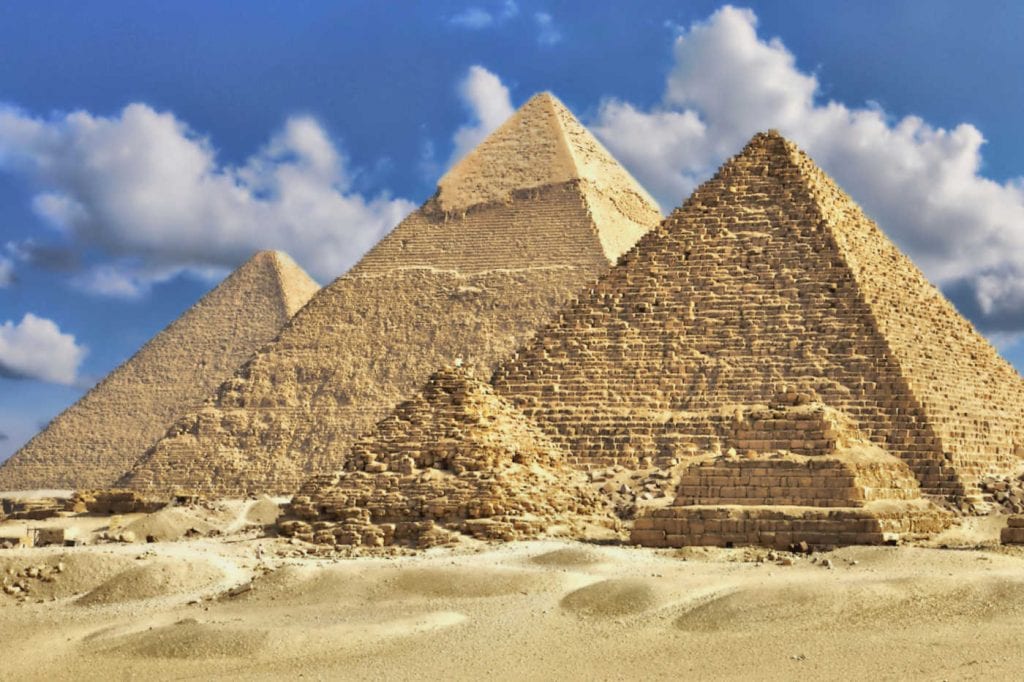 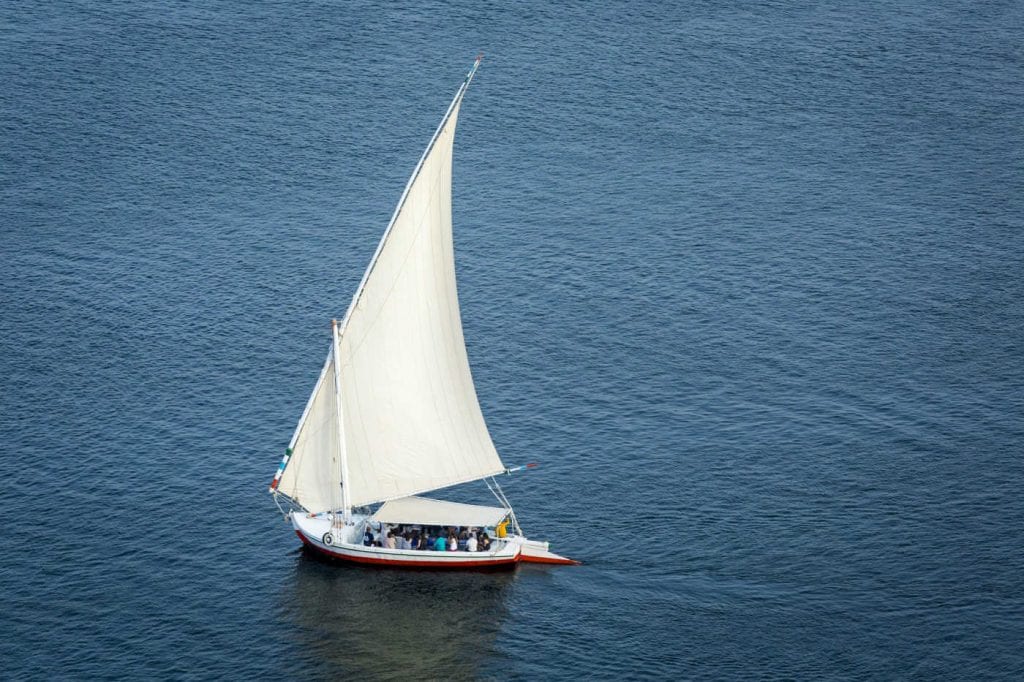 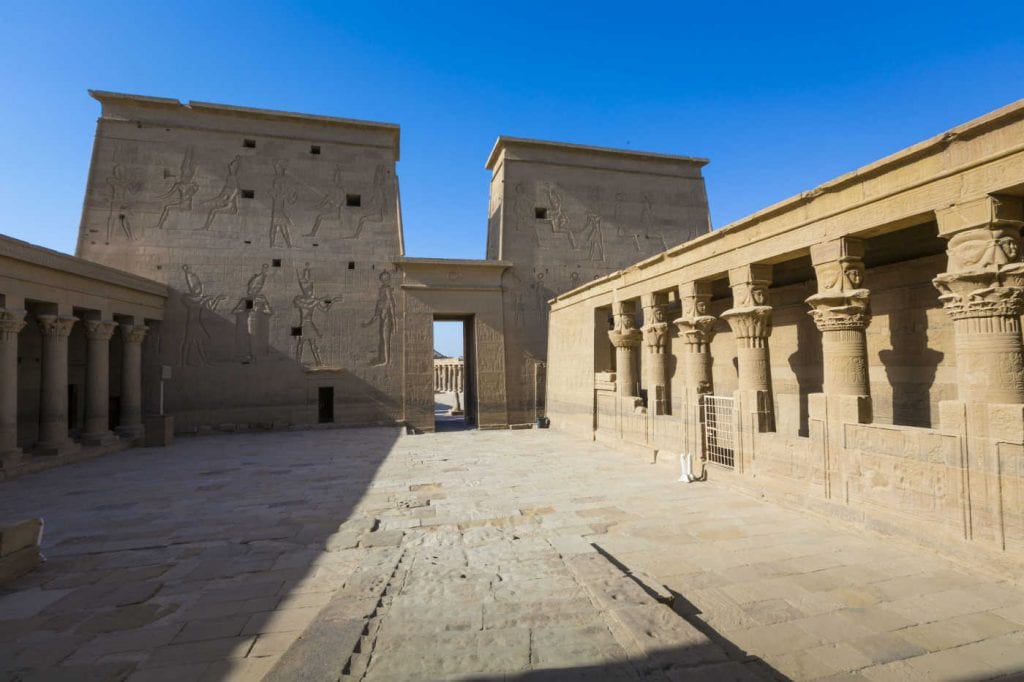 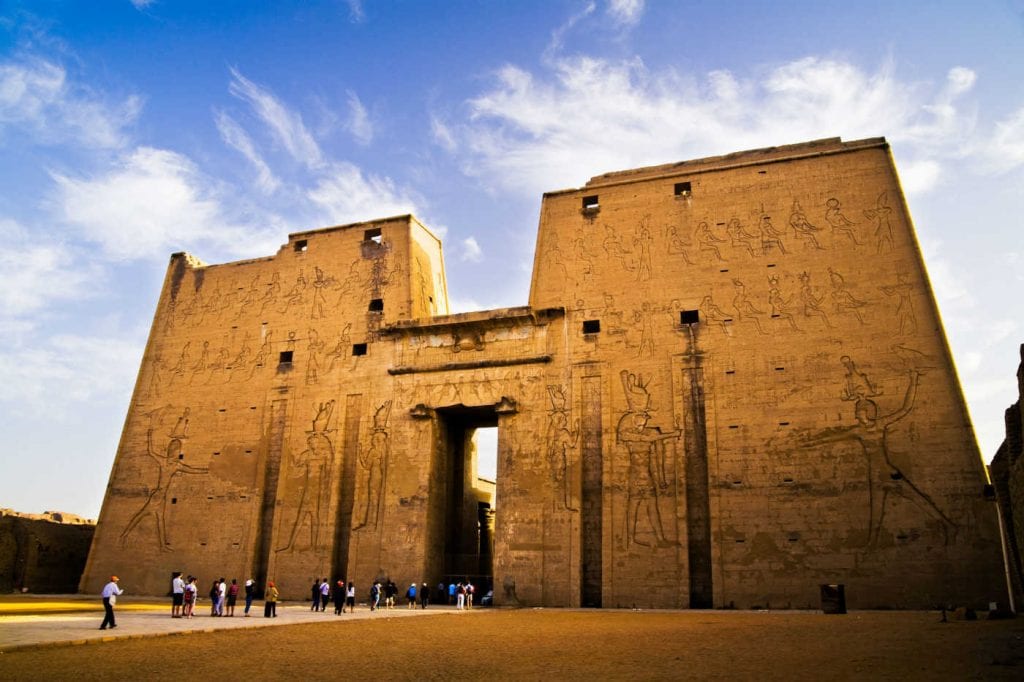 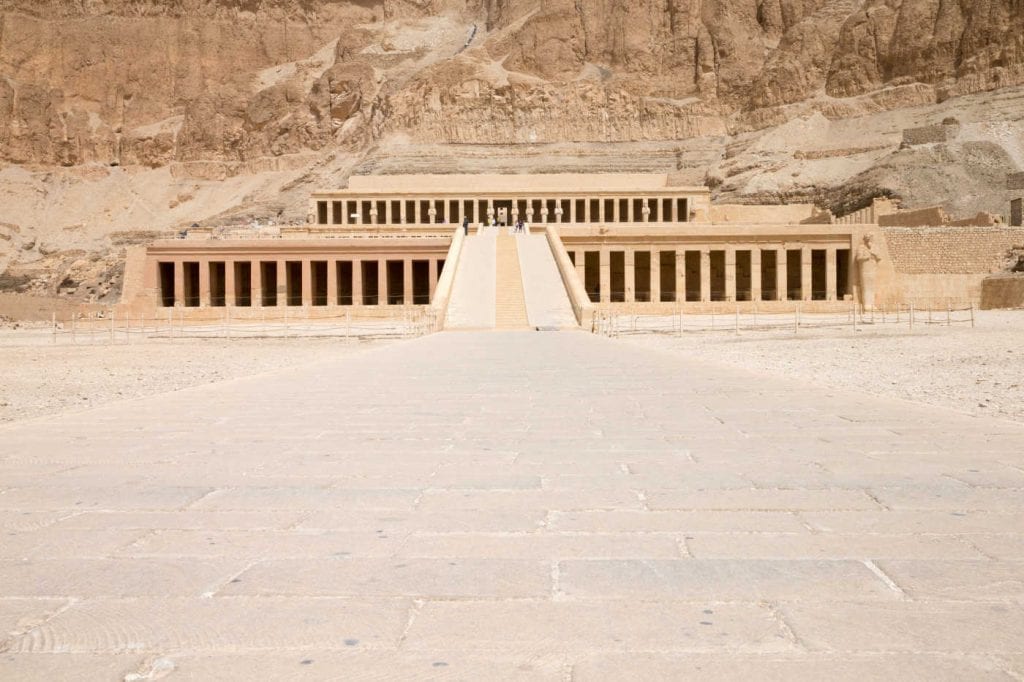 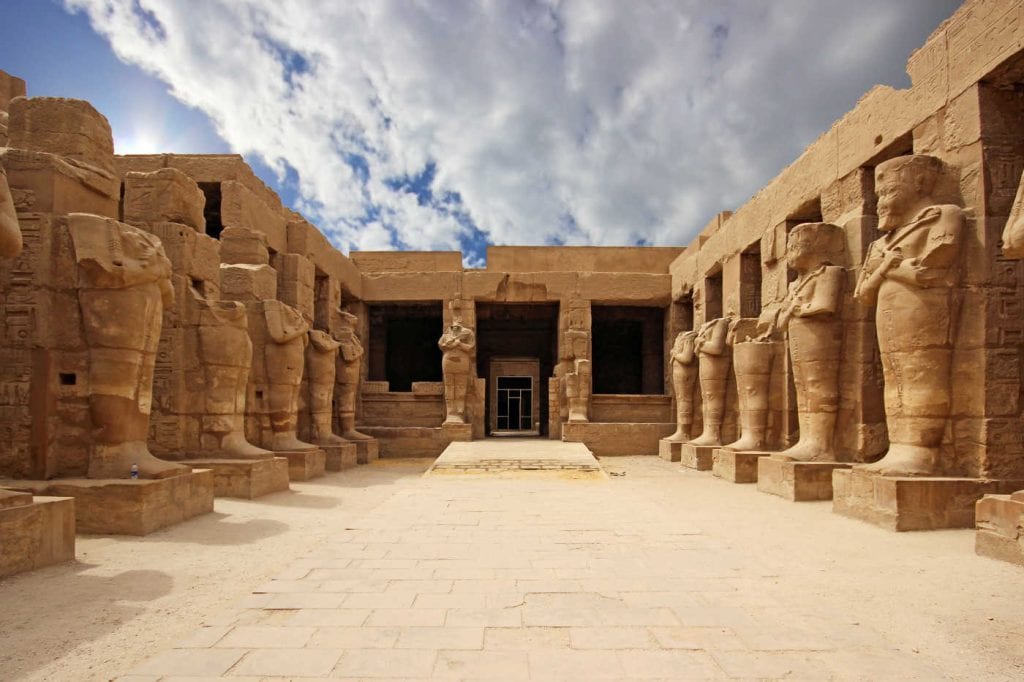 Gem of the Nile with Cruise

From tales of Cleopatra and King Tut, Egypt has fascinated travelers for centuries. On this 7-night vacation, get a crash course on Egyptian culture and history as you explore the country’s most iconic sites.

Fly into Cairo and spend two nights in Egypt’s vibrant capital. On a full-day tour, see a bustling bazaar, fascinating museum, the Pyramids of Giza and the Sphinx – two monuments at the top of almost every traveler’s bucket list.

You’ll then fly to Luxor for your 4-night cruise of the Nile, Egypt’s lifeline. Aboard a luxurious ship, cruise the famous river and explore the famous temples and tombs that straddle it: Luxor, Karnak, Kom Ombo and Edfu. Your trip ends in Cairo, where you’ll have one night to experience the city on your own.

Vacation is round-trip, per person, based on 2 travelers. Includes air, airport taxes, airport transfers, hotels, tours, daily breakfast and more. Additional baggage charges may apply. Starting sample rate is from JFK and is not guaranteed until booked. Prices include airfare, fuel surcharges, airport taxes and fees. Air & land tour prices apply from the gateway airport or city specified in the Package Highlights. Prices will vary from alternative gateway airports or cities and may be higher. The total price will be clearly displayed prior to any deposit being required. Additional baggage charges may apply.sctr

Say hello to Egypt’s capital, Cairo! Upon arrival, you will be welcomed and assisted through immigration and customs by a representative who will be holding a sign with your name. After transferring to your hotel, enjoy the remainder of your day at leisure.

Begin your tour at the famous Great Pyramid of Giza! Giza is the main part of a complex that included two mortuary temples in honor of Khufu (one close to the pyramid and one near the Nile), three smaller pyramids for Khufu’s wives, an even smaller “satellite” pyramid, a raised causeway connecting the two temples, and small Mastaba tombs surrounding the pyramid for nobles. One of the small pyramids contains the tomb of Queen Hetepheres (discovered in 1925), sister and wife of Snefru, and the mother of Khufu.

The next stop takes you to the Lord of the Sphinx. The word sphinx, which means “strangler,” was first given by the Greeks to a fabulous creature which had the head of a man and the body of a lion. In Egypt, there are numerous sphinxes, usually with the head of a king wearing his headdress and the body of a lion. The head and face of the sphinx certainly reflect a style that belongs to Egypt’s old kingdom and to the 4th dynasty in particular.

After lunch at a local restaurant, visit the Egyptian Museum. Your Egyptologist will escort you on a fascinating tour of 7,000 years of history, as this famous museum houses the world’s largest collection of ancient Egyptian artifacts (more than 145,000 items on display). Highlights include the famous Tutankhamen collection with its beautiful gold death mask and sarcophagus, and the Royal Mummy room, which houses an additional eleven Pharaonic dignitaries.

Your final stop takes you to the fascinating Khan El-Khalili Bazaar. Reputed to be the largest bazaar in the Middle East, it was originally founded as a watering stop for Caravanserai in the 14th century. As you wander through the labyrinth of narrow streets, you will find workshops and stalls selling all kinds of items from woodwork, glassware and leather goods to perfume, fabrics and Pharaonic curiosities.

Today, transfer to Cairo airport for your flight to Luxor. Upon arrival in Luxor, meet a representative and transfer to your Nile Cruise. Settle into your room and enjoy lunch on board. After lunch, enjoy a half-day tour taking you to the Karnak and Luxor temples!

Transfer to cruise ship – Based on Availability

Guided tour of Karnak Temple and Temple of Luxor (half-day)

Discover Karnak, a great temple of Amon Ra known during the Middle Kingdom period as Ipt-Swt, which means the Selected Spot. It was also called Pr-Imn, which means the House of Amon. At the entrance, you will find a ram-headed avenue of Sphinxes, which was built to protect the Temple. There are 20 rams on each side, and as you cross this pylon, it takes you into an Open court, whose dimensions are 325-feet long by 250-feet wide, built during the 22nd Dynasty, and containing rows of bud papyrus columns.

You’ll then head to the Temple of Luxor, among the most beautiful temples in Egypt. It was known in the New Kingdom period as Ipt-Rsyt, which means the southern shrine (This was to differentiate between this Temple and Karnak Temple, which was the northern house of Amon Ra). The temple runs close and parallels the river Nile from north to south, and it was constructed on the site of a small temple of Amon, built by kings of the 12th dynasty.

Guided tour of the West Bank, including Valley of the Kings, Hatshepsut Temple, Colossi of Memnon

Enjoy a tour of the West Bank! Your first stop is the Valley of the Kings. The first king of the New Kingdom, Ahmose of the 18th Dynasty, built a pyramid-like structure at Abydos, which may or may not have been his original tomb. The Valley, known as Biban el-Muluk, “doorway or gateway of the kings,” or, the Wadyein, meaning “the two valleys,” is actually composed of two separate branches. The main eastern branch, called TA set aat, or “The Great Place,” is where most of the royal tombs are located, and in the larger, The Valley is hidden from sight, behind the cliffs, which form the backdrop to the temple complex of Deir el-Bahari.

Next stop: the Temple of Hatshepsut! The mortuary temple of Queen Hatshepsut, the Queen’s architect, Senenmut, designed it and set it at the head of a valley overshadowed by the Peak of the Thebes, the “Lover of Silence,” where lived the goddess who presided over the necropolis. His daughter became pharaoh, her father Tutmose I circulated the legend that the God Amon became the father of Hatshepsut and therefore she is half a God. She was married twice unfortunately and her second husband and stepbrother Tutmose III hated her so much that he had all pictures and inscriptions of her destroyed after she died.

Your final stop brings you to the Colossi of Memnon. These two, gigantic figures of Amenhotep III were originally situated in front of his Mortuary temple which was destroyed for unknown reasons. The two colossi are made of sandstone, which during ancient times was brought from Gabal El Silselah. Each colossus, including the pedestal and the crown, is about 70-feet tall and represents King Amenhotep III seated on his throne, wearing the Nimes, or royal headdress, with the divine cobra protecting his forehead.

Today, visit the Temple of Edfu, the most well-preserved temple of Ancient Egypt, renowned for its gigantic pylons. You’ll also visit the Temple of Kom Ombo, dedicated to Sobek the crocodile god, and Horus the falcon-headed god. After your tour, have lunch on board and sail to Aswan.

On this tour, visit the Temple of Edfu and Kom Ombo Temple. Edfu was the 2nd Nome of Upper Egypt and the center of the cult of a triad of Gods, which consisted of Horus of Behdet, Hathor, and their son, Hor-Sama-Tawy. Edfu was known as “Apollo polis Magna” because the Greeks identified Horus with their God Apollo. Construction began during the reign of Ptolemy III (about 237 BC) and was finished during the reign of Ptolemy IV.

You’ll then sail to Kom Ombo and visit Kom Ombo Temple. The temple is unique in one respect: it is dedicated to two gods, and the entire temple holds two perfectly symmetrical sections. The sanctuary to the left is dedicated to the falcon-headed sky god Harwer (also written Haroeris), or Horus the elder and his family.

In Aswan, explore the High Dam, constructed in the 1960s to tame the mighty waters of the Nile, and Philae Temple, one of Nubia’s most important monument sites. You’ll also get to experience sailing on a felucca, a traditional sailboat used on the Nile.

Located near Aswan, the world famous High Dam was an engineering miracle when it was built in the 1960s. It contains 18 times the material used in the Great Pyramid of Cheops. The Dam is 11,811 feet long, 3215 feet thick at the base and 364 feet tall.

You’ll then visit Philae Temple, dedicated to Goddess Isis and constructed on the beautiful island of Philae. Philae the modern day name is Greek but the ancient Egyptians called the island P-aaleq which amongst other definitions has the dual meaning of “end” and “creation.”

Felucca ride in Aswan, around Agha Khan & The Elephantine Island

Enjoy a relaxing ride on a felucca, a traditional sailboat found on Egypt’s Nile. Feel the river breeze as you sail around Elephantine, an island forming part of the city of Aswan, and the Mausoleum of Aga Khan.

Your Nile Cruise ends today. Head to Aswan airport for your flight to Cairo where you will spend your final two nights. The rest of the day is yours to explore on your own – you might want to check out Cairo Citadel or the Mosque of Muhammed Ali.

Your Egypt vacation ends today. At the appropriate time, you’ll be transferred to Cairo airport for your flight home.

Egypt 9 Days
$1,869.00
EGYPTIAN ESCAPE WITH NILE CRUISE If you’ve dreamed of standing at the foot of the great pyramids, now is the time to escape to Egypt....
View Details
Available through out the year:

Best of Greece and Egypt with Nile Cruise

Egypt, Greece
$4,493.00
Best of Greece and Egypt with Nile Cruise The cradle of all civilization Between the two, Greece and Egypt offer more history than many hundred...
View Details
Available through out the year: