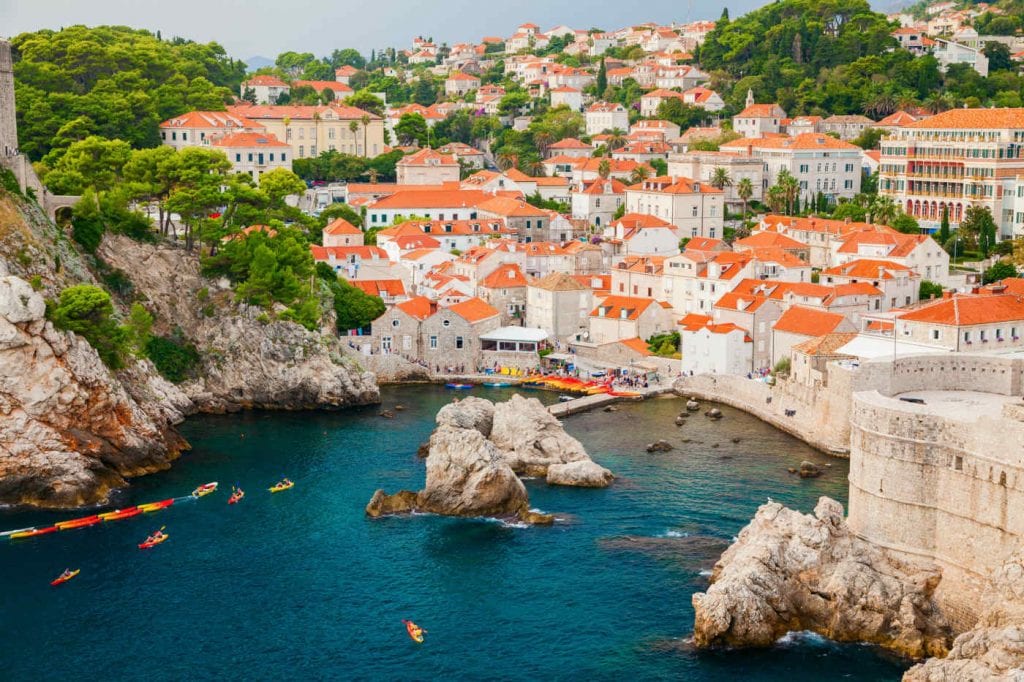 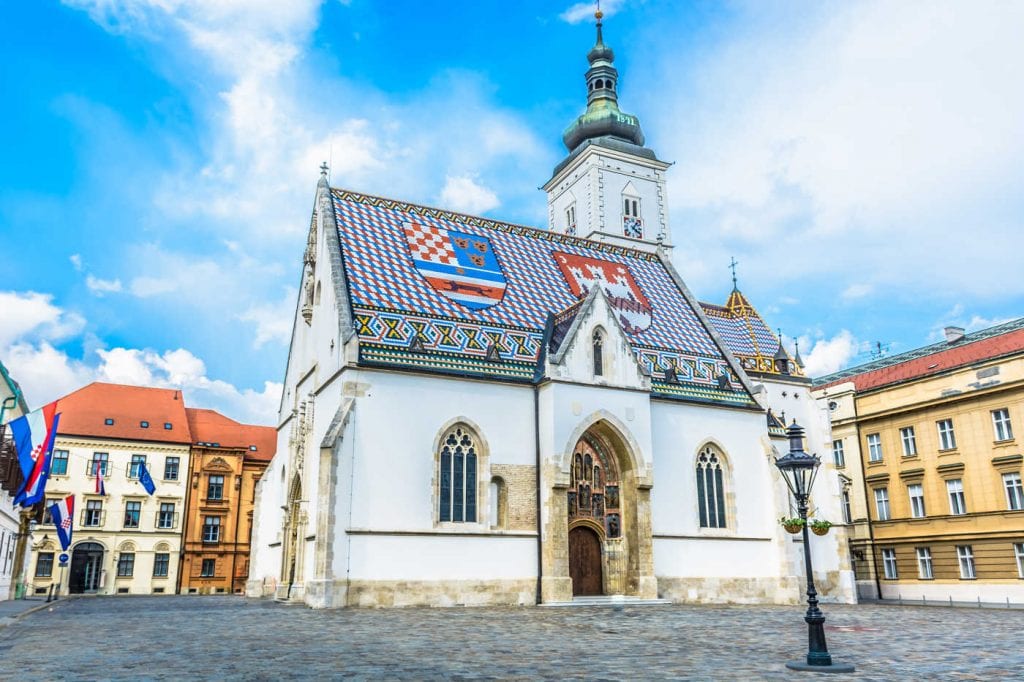 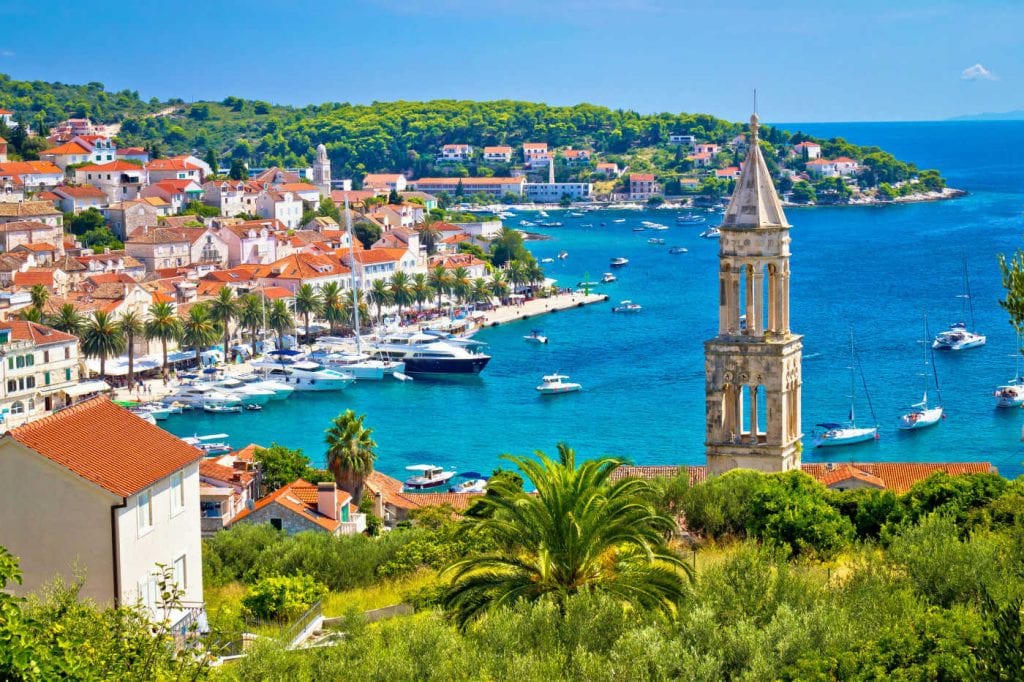 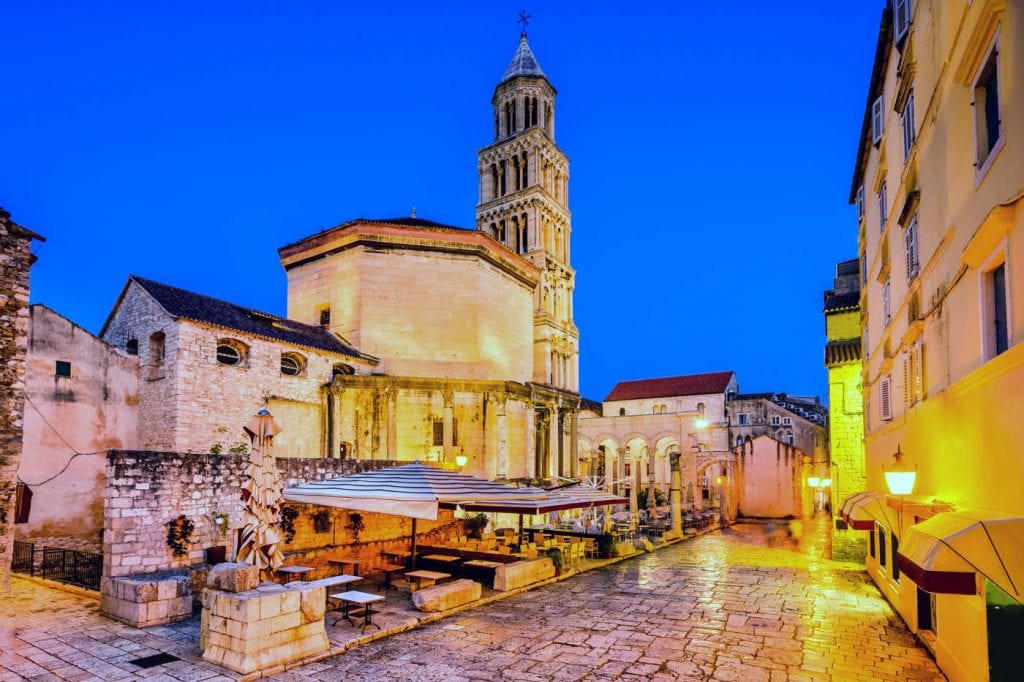 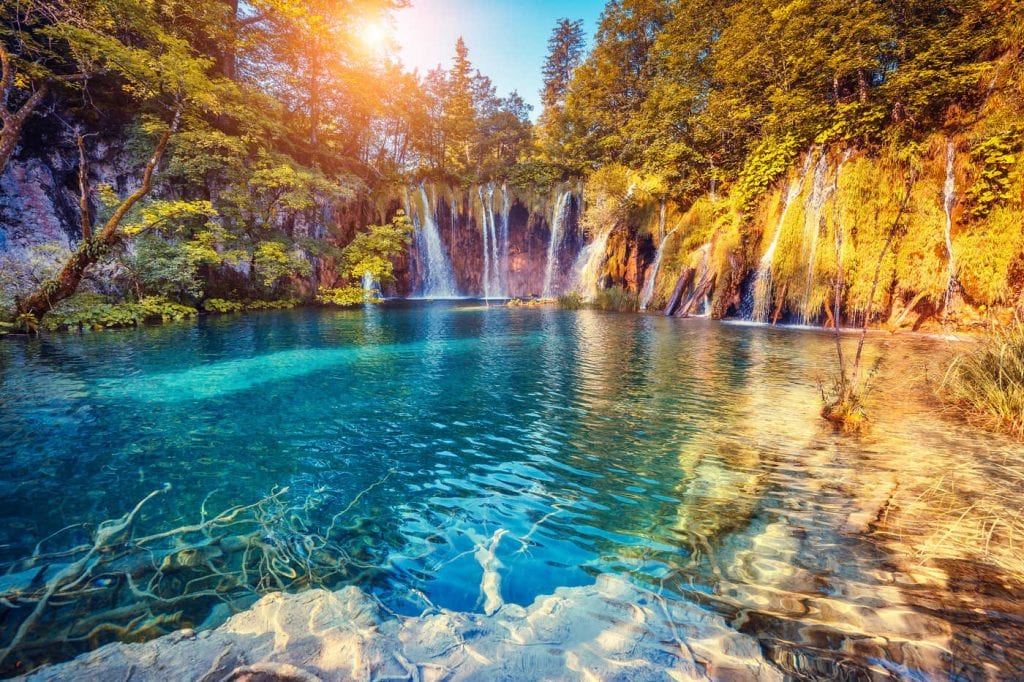 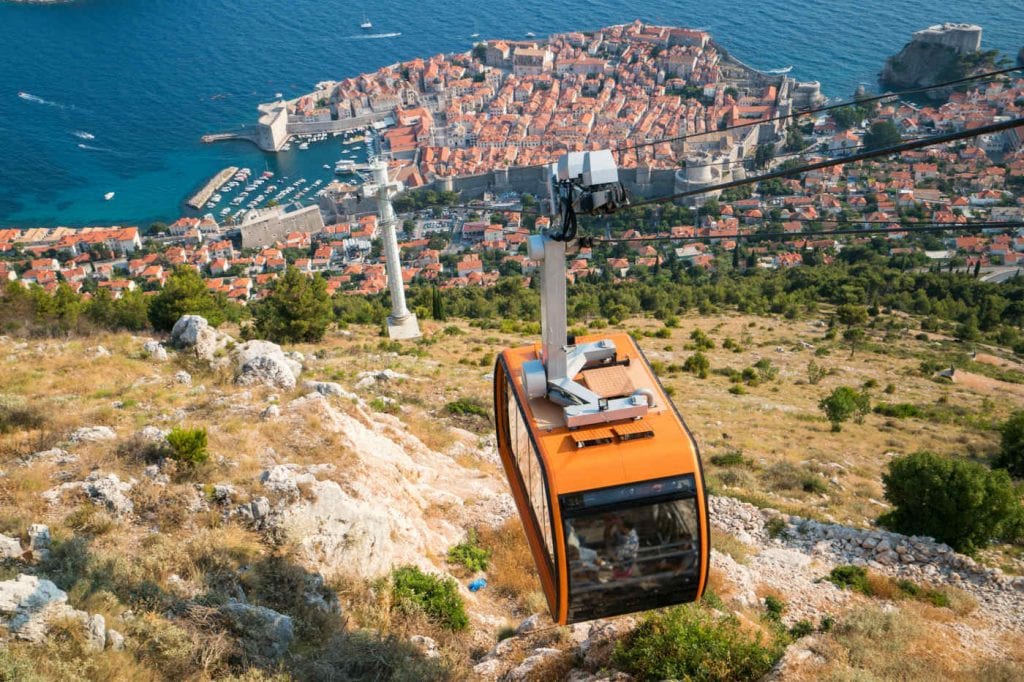 From Dubrovnik to Plitvice Lakes National Park, Croatia is filled with eye-popping wonders waiting to be explored. On this 8-night vacation, get to know this stunning country by some of its most well-known sights.

So, you want to go to the world’s newest hot spot: Croatia! Who doesn’t? You’re ready to travel, but fitting all the raved-about sites into one trip seems, well, tough. Fear no more! Lucky for you, this vacation package is designed for you to easily experience all of Croatia’s highlights! You’ll begin in bustling Zagreb, then move on to Plitvice Lakes National Park, Split, Hvar, and Dubrovnik. All of that in one trip? You bet. With included tours, private transfers, and scenic ferry rides, you’ll get a true taste of each destination.

This perfect “sampling platter” of Croatia will take you from charming old town streets to the turquoise Dalmatian Coast. Enjoy private walking tours of Zagreb, Old Dubrovnik, and Split – including entrance to the breathtaking Diocletian Palace! Feast your eyes on mesmerizing waterfalls as you take advantage of your included entrance to Plitvice Lake National Park, and feel the salty sea breeze in your hair as you take the ferry to the resort island of Hvar. Looking for the perfect blend of natural beauty, bright blue coasts, old UNESCO-recognized towns, and vibrant cities? Look no further; you’ve found it!

Arrive in the vibrant capital of Croatia! Grab your luggage, meet your transfer, and enjoy a convenient ride to your first hotel. Settle in, then get to know the city!

Stroll around the cobblestone streets in medieval Gornji Grad, Zagreb’s Upper Town, and be sure to visit the ornate Church of St. Mark’s!

ZAGREB, CROATIA 4 out of 5 stars

Sitting pretty in Zagreb’s Donji Grad neighborhood, the Hotel Dubrovnik features an on-site casino, a restaurant, air conditioning, a salon and hairdresser, and free Wi-Fi. Guests can take a quick stroll and find themselves at the Lotrscak Tower or the Croatian National Theater, both of which are under 2,000 feet away.

Rooms are plus and equipped with a flat-screen satellite TV, free Wi-Fi, air conditioning, a desk, hypo-allergenic bedding upon request, a safe, ironing facilities, a minibar, and private bathrooms complete with complimentary toiletries and a hairdryer. A little under three and a half miles away is the beautiful Jarun Lake, and a 7 mile trip will deliver you to Pleso Airport.

In the early afternoon, relax on a scenic transfer to the eye-popping Plitvice Lakes Naitonal Park!

Indulge in the relaxing environment in the wild heart of the Plitvicka Lake National Park at the Hotel Jezero. Enjoy the lush views of the park from your room and enjoy the hotel’s nightclub, restaurant, dancing bar, and spa treatments. Small children can be entertained at the children’s playroom on-site. Rooms range from standard rooms to semi-suites and suites, all with beautiful views of the park, and some with sitting rooms. The hotel is just 1,000 feet from Kozjak, the park’s largest lake.

See the gems of Zagreb on this morning tour! You’ll venture through historic Upper Town, then discover by some of the religious highlights of the city, from the medieval St. Mark’s Church to the Baroque-style St. Catherine’s Church.

You’ll also pass the Zagreb Cathedral – the tallest build in Croatia – as well as the important and iconic Parliament building and Government Place.

After breakfast, take a walk around the breathtaking lower lakes on your own. Meander through this stunning landscape of 16 terraced lakes surrounded by lush vegetation, dense woods, and soaring mountains.

In the afternoon, you’ll be taken to the coastal town of Split, where you’ll explore the city on a private walking tour. Take advantage of your included entrance to Diocletian’s Palace!

SPLIT, CROATIA 4 out of 5 stars

Featuring a lovely outdoor pool and sun terrace, the Radisson Blu Resort brings the luxury associated with all four of its well-earned stars. Located just a mile from Bacvice Beach in the Znjan neighborhood in Split, the hotel offers a spa and sauna with spectacular views, a hot tub, a restaurant, a bar, private on-site parking for a surcharge, a 24-hour front desk, a gift shop, a hairdresser, and bike and car rental.

Rooms are air conditioned and outfitted with a flat-screen TV, a desk, a safe, a minibar, blackout curtains, and private bathrooms complete with complimentary toiletries, a hairdryer, slippers, and bathrobes. Some rooms also have terraces, balconies, and/or sitting areas. The hotel is 9 miles from Split Airport, 3 miles from Marjan Hill, and only a mile and a half from Gregory of Nin.

Enjoy a walking tour of the historic inner city of Split, built around the Roman Emperor Diocletian’s Palace, a UNESCO World Cultural Heritage Site. Meet your guide in front of the Diocletian Palace entrance, then explore the remnants of Split’s Roman heritage.

Gaze in awe at its Renaissance and Gothic structures and the Temple of Jupiter, originally an ancient Roman temple dedicated to the king of the gods. Continue to Peristyle Square in the center of the city, then end at the Cathedral of Saint Domnius, regarded as the oldest Catholic cathedral still in use.

Fuel up with breakfast, then hop aboard a ferry to the island of Hvar! As you glide atop the sea, gaze out at the bright blue waters that surround you. Settle in to your hotel, then take a walk through the main square.

While in Hvar, be sure to try some of Croatia’s seafood specialties, like gregada, peka and brodet!

HVAR, CROATIA 4 out of 5 stars

Immerse yourself in luxury and elegance at this heavenly beachfront hideaway. Settle into your spacious room, take a peek at the view from your window, then use the free WiFi to send amazing photos to your friends and family. Go ahead, make them jealous.

Take a quick nap on your large, comfortable bed, freshen up in your beautiful bathroom, then unpack your swimsuit and head outside. Take a refreshing dip in the pool, lounge in the warm sun, or swim up to the pool bar and enjoy a well-deserved drink. Pamper yourself with an ocean-side massage, work all your stresses away in the rooftop gym, or walk along the white sand of the beach.

When you work up an appetite, indulge in a variety of different cuisine at any of the magnificent on-site restaurants. Savor steak and seafood on the Veranda at Bonj, enjoy a tasty bite while feeling the vibes of lively music at Momo Beach, or feast your eyes on panoramic views at the elegant Windows on Hvar Restaurant.

Wake up and smell the beauty! Hvar boasts a beautiful blend of party culture, beach relaxation, and old-village charm. There’s plenty to do in Hvar Town, which is filled with waterfront parties, cute shops, and trendy restaurants.

If you’re looking to step off the beaten path, however, you might want to take a 45-minute hike east towards Milna, where you’ll be rewarded with crystal-clear, white-stoned Mekicevica Bay. This spot is frequented by naturists and is also known as Robinson’s Beach.

You also might want to explore the old, less populated villages that exist outside the main town center. Check out Stari Grad, the oldest town in Croatia, or the tiny village of Humac, filled with small stone homes and lavender fields!

After a lovely morning in Hvar, you’ll be transferred to the Hvar Pier where you’ll catch a ferry back to Split. Say goodbye to Split, once again, and head on your merry way to Dubrovnik! Your driver will take you along the spectacular Adriatic Coast, past old fishing villages and resort towns – be sure to have your camera ready.

Upon arrival in Dubrovnik, check-in to your hotel and relax. If you have enough energy, stroll around the Old Town, encased in the historic stone city walls.

DUBROVNIK, CROATIA 4 out of 5 stars

Sitting quietly in by Gruz Harbor, Hotel Lapad is a short 12 minute walk from the beach, surrounded by palm trees and a relaxed atmosphere. Guests can enjoy the history of the area as well as an on-site restaurant, a private boat shuttle, live music, entertainment, a 24-hour front desk, free Wi-Fi, room service, and a garden.

Rooms are modern and are equipped with air conditioning, a flat-screen satellite TV, a minibar, free Wi-Fi, tea and coffee making facilities, a desk, a safe, and private bathrooms complete with complimentary toiletries and a hairdryer. The old town of Dubrovnik is only 2 miles away, and is easily accessible by the local bus running every 10 minutes.

After breakfast, take tons of photos on a private walking tour of Old Dubrovnik! You’ll see the Rector’s Palace, the Bell Tower Clock, monasteries, and much more. When the tour concludes, spend the rest of the day at leisure!

See the highlights of Old Town Dubrovnik on a morning walking tour! Meet your local guide at Pile Gate in front of Old Town, the natural starting point to any Dubrovnik visit. Begin at Rector’s Palace, built in the 15th-century as the home of Dubrovnik’s elected rector, then see Bell Tower Clock and Orlando’s Column, a symbol of the city’s freedom.

Continue to Sponza Palace, a splendid 16th-century palace that was a customs house, a mint, a state treasury and a bank. You’ll also enjoy views of the Dominican Monastery and the famous Franciscan Monastery with its pharmacy, one of the oldest in the world dating back to 1371.

Fuel up with a yummy breakfast, then enjoy the day sightseeing at your own pace. Looking for a spectacular view of the city? Consider hopping in a cable car and seeing a truly unique perspective.

Game of Thrones fan? Stroll around the walled old city, specifically St. Dominika Street, and feel like you’re walking through the show’s set. Many Game of Thrones scenes have been shot in Dubrovnik, so if you feel a sense of deja vu or familiarity, you’ll know why!

Savor the flavors of one last Croatian breakfast, then squeeze your souvenirs into your luggage and meet your transfer. Spend your flight home scrolling through photos and dreaming about your next adventure.